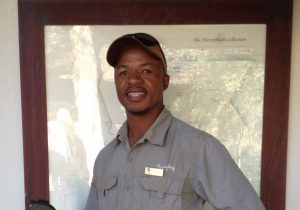 Meet Kilmon Ndlovu, one of our guests’ favourite characters from Chapungu Tented Camp! Born and bred in the bush, Kilmon grew up in the small settlement of Acornhoek, about 25km from Thornybush. He spent his youth immersed in the great outdoors, tending his father’s livestock in his spare time.

Kilmon’s mother worked as a housekeeper at Itle Nature Reserve, where the children were invited to visit on occasion. During these trips, Kilmon was enthralled by the game drives that they were invited on and listened with rapt attention while trackers explained more about wild creatures to the young children.

During his afternoon duties as a cattle herdsman, on the land located opposite Sehandrahem and Itle game reserves, Kilmon started practicing his tracking skills. The novelty never wore off and he enrolled with FGASA (The Field Guides Association of South Africa) shortly after passing grade 12 at Masingitana High School.

Kilmon earned his level 1 certificate as a qualified tracker and field guide, which armed him with the basics about guiding, geology, ecology, conservation management and knowledge of local fauna and flora.

Equipped with his certificate, Kilmon immediately applied at Thornybush Private Reserve. He accepted the only position available at the time, which was that of gardener, eventually working his way up to the position of butler.

After years of dedicated grafting, a position as a tracker at Thornybush Game Lodge became available. Kilmon applied and was accepted. His passion, people skills and hard work soon became a hit with the guests, encouraging him to further his studies with FGASA.

Not long after this, Kilmon was appointed as a relief guide at the Chapungu Tented Camp. Here he really came into his own, learning a tremendous amount about wild animals and the reserve itself.

This prompted Thornybush to promote Kilmon to his dream job as permanent Field Guide at Chapungu Tented Camp, where he has been sharing his knowledge and love of the bush with guests ever since.

Kilmon has been with Thornybush for over 11 years now and is still loving his job.

When you stay at the Chapungu you will get to experience his infectious good humour and wealth of knowledge.

Here’s a heads up – Kilmon seems to have developed a knack for finding the big cats while on safari!

Guest Questions - The Difference Between Ants and Termites