Do you know what the difference between a poisonous creature and a venomous one is? Is there even a difference? Basically, they both use toxins, which are substances that cause substantial, harmful side effects, either to defend themselves or to paralyse their prey. The difference lies in the application of these toxins.

What is in a name?

There is often confusion, even from scientific experts, between creatures that are poisonous and those that are venomous. The biggest distinction is that venom has to be injected through a wound while poisons are either ingested, or absorbed through the skin.

Venomous creatures will wound their prey by using either a fang, stinger or spine and then inject their toxin. Whereas a poisonous creature or organism will passively secret their toxin, usually through their skin.

The term venomous is really linked to creatures that bite or sting in order to inject their toxins. In most cases venom is actually made by the creature that uses it, so it is far more physically complex than a poison. The venom needs to bypass the digestive system and be delivered more directly into the body, namely through a bite or sting. Spiders and snakes have hollow fangs through which they distribute their toxins, paralysing the prey’s neurological or circulation systems.

Apart from the obvious venomous creatures such as snakes, spiders and scorpions there is a long list of other nasty culprits: bees, wasps, centipedes, caterpillars, some corals, octopus, jellyfish, and the list goes on. But, if you are to ever leave your home again feeling safe perhaps we should stop there!

What is your poison?

Most amphibians are poisonous (think: toads and frogs) because they all have glands in their skin that secret toxic substances. These toxic substances evolved in order to deter predators – which means that not all frogs are necessarily poisonous to humans. When a predator swallows a frog the toxins travel through the body at a relatively fast rate causing temporary illness or even death. Most poisonous creatures are brightly coloured which acts as a warning sign to any would-be predators.

There are also some seriously poisonous plants, which are more common than poisonous creatures. Although they do not necessarily have teeth or stings they can secrete their toxins when unsuspecting humans come into contact with them, often causing hives, itchy skin or rashes. There are also a number of plants in the Greater Kruger Park area that are deadly when consumed, such as the Castor Oil Bush, Pride Of Ceylon or probably the best known is the Tambotie. 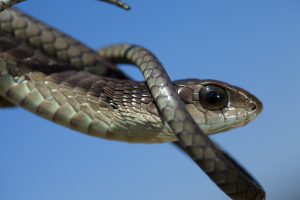 In a few, rare cases there are creatures that can be both venomous and poisonous, like the spitting cobra, which is found throughout the Lowveld. This snake can give an incredibly painful, dangerous bite as well as spray blinding, burning venom into its prey’s eyes. So, in conclusion, when asked if a creature is poisonous or venomous occasionally the answer can be: both!