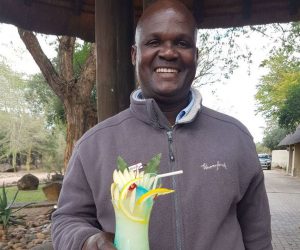 If you go through your South African safari without hearing the statement, “I’m going to make you a surprise”, you haven’t made the most of your stay at Thornybush Waterside Lodge.

After an active day in the bush and just before you head off on a sunset drive, you simply have to experience the refreshing delights on offer at the lodge bar. A moment’s hesitation as you contemplate your choice for liquid refreshment and you’ll hear that well-worn mantra.

Barman, Albert Mnisi loves to wow his patrons with exotic, colourful inventions of his own design.

The art of the cocktail is in the execution. Not only with regard to the skillful blending of ingredients, but the flamboyant flipping of the shaker, too. A healthy dose of energetic enthusiasm adds extra punch to every mix.

Albert Mnisi loves his job and it shows. While Albert has only been with Thornybush since the beginning of 2018, he has already progressed to an impressive level of frontline service excellence. An added bonus is his ability to infuse these happy hours with colourful and endearing tales of life in the bush.

Moving up the Ranks

Albert hails from the small town of Malelane but grew up in Somerset Trust, an area close to Mkhuhlu, where you’ll find him spoiling his wife and four children after hours. Albert loves entertaining people and longed for a career in the hospitality industry.

The very first position he applied for after school was that of bartender at Lion Sands in the Sabi Sands Game Reserve. He was unsuccessful but took the opportunity to start as a waiter and work his way up. His employers couldn’t ignore his service ethics and personable nature for long and at the first opportunity, they installed him behind the bar where he could put his talents to better use. Not content with settling for this first milestone, Albert continued to apply for more senior positions until he became Head of Service. After 30 years in the industry, Albert decided it was time to slow down and applied for a lower-key position at Thornybush, pursuing his original passion.

He has plans to retire soon and run a tuck shop in his village to provide his local community with their daily groceries. In his leisure time, he plans to relax with family and friends, go fishing and indulge his passion for playing and watching soccer.

For now, he’s still enjoying his daily interactions with guests and you’ll still find the master at work behind the bar at Waterside Lodge for some time to come. His friendly nature and wonderful concoctions will be sorely missed by both colleagues and guests when he embarks on his well-earned retirement. Don’t miss the chance for a ‘welcome surprise’ during your stay at Waterside Lodge, book your South African safari with Thornybush now.