Hippos are the third largest mammal found in Africa, and believe it or not, their closest living relatives are actually pigs, whales and dolphins! Who would have thought? There are many wild theories about hippos, but most of them are simply not true. We’ve decided to investigate the four most commonly shared “facts” about hippos, and share the truth about these animals.

Hippos do not actually swim per se, their preferred method of moving around in the water is by walking, galloping or bouncing along the bottom. They have extremely strong leg muscles that not only help propel them through the water, but also assist in projecting them from the ground to the surface.

The aquatic environment that hippos spend most of their days in helps them with buoyancy, as well as reducing a gravitational pull. However, hippos have an extremely high bone density and so, are able to control the specific gravity of their body mass. Therefore, it is easy for them, in deep water, to drop to the bottom and move along without floating to the surface as would happen to us humans.

It is widely believed that hippos are herbivores. Yes, they do mainly eat lots and lots of grass, however hippos also eat meat, and more so than we actually think.

Evolution has adapted hippos for a largely plant-based diet, yet this does not mean they cannot physically eat meat. Hippos have a very large mouth and unusual teeth, which means, unlike other herbivores, they are physically able to kill prey, and yet there are very few incidents recorded of hippos killing animals in order to eat them. Most of the meat that they have been found eating is either carrion or has been killed by another predator.

So, why are there so few reports of hippos occasional carnivorous behaviour? It is most likely due to the fact that hippos feed when they are out of the water, which is at night-time, when us humans are not around to witness it, and therefore it has gone mostly undocumented. 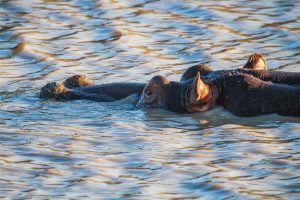 Hippos are only found in Africa

Currently, there are around sixty wild hippos who happily live in Columbia’s waterways. How did this African animal end up there, you might ask?

Pablo Escobar, the notorious drug lord, kept a menagerie of exotic animals as pets, including four hippos. After he was killed in 1993 the Columbian government seized all his animals and relocated them, except for the hippos. They were left to fend for themselves, and so they made their way into the Columbian waterways, where they successfully reproduced and are living quite contently today.

Hippos are not submissive

Hippos are not the docile animals that many people think they are, in fact hippos kill more people in Africa than any other animal. This usually happens in unprotected areas, or outside of well-known reserves, where people come to rivers to collect water or do washing. These unsuspecting individuals often get caught between a hippo and her calf, or the hippos source of water, which causes these huge mammals to become aggressive and attack.

However, at Thornybush, when viewing them from the back of a comfortable safari vehicle, while they snort and play in a pool of water, it is easy to fall in love with these large ungulates. We currently have many dams with hippos of all sizes, and as they are territorial they are definitely not going anywhere. So, on your next evening safari make sure to stop for a gin and tonic with a pod of hippo, it will be something you won’t forget. 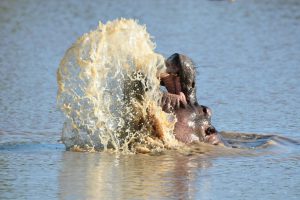