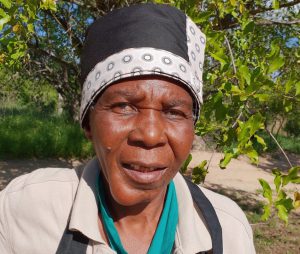 Laiza Ndubane has been with Simbambili since before Simbambili was here. She started with Thornybush in 1997 and was one of the first workers employed to help clear the brush and rehabilitate the environment in the area where the camp now stands.

Once things were up and running, she tried out several positions around the Thornybush camps and was invited back to work as a sculler in the kitchen when Simbambili opened. It’s a task which she still performs with great precision and expertise to this day, 22 years later.

It’s hard to believe that someone can take so much pride in cleaning task, but Laiza has a next-level approach to everything that she takes on. It’s not just the dishes you can eat off when Laiza is finished at her workstation.

What’s in a Name?

Laiza’s nickname, Gogi, is the diminutive of the term for grandmother, a title she has earned thanks to her extensive knowledge of life in general. She is a highly respected member of her community and as a qualified sangoma (traditional healer), she treats all manner of ailments in her spare time.

Thanks to her long life in the bush Gogi knows every medicinal use of the plants in her environment and puts these to good use helping her neighbours, far and wide.

There’s more to Gogi than plates and panaceas though. She is also an expert crafter, making grass mats and assorted knick-knacks from recycled materials, runs a small farm at home, collects firewood and makes beer out of marula fruit to sell.

Gogi is the master seamstress behind the outfits that Simbambili’s choir wears to entertain our guests and you’ll see her proudly banging her own handmade drums during these sing-a-longs.

On one occasion, Gogi’s skills were used to make an impromptu wedding even more special.

At Simbambili, we can arrange a wedding at the drop of a hat, but wedding bands don’t grow on trees – or do they? Gogi saved the day by making two unique wedding bands out of tree bark for this spontaneous couple.

Gogi takes great pride in her long association with Simbambili and the fact that she can support her family thanks to her many talents. Her greatest joy is found in carrying out her many tasks and hobbies according to her own high standards.

Gogi’s successes appear all the greater when one considers that she hasn’t had the easiest life. She was born on a property in the southern section of the Sabie Sand Game Reserve and relocated to Metsi when the property became commercialised. When she got married, she moved to her husband’s home in Serville and they later moved to Dixie, which is close to Simbambili just outside Gowrie Gate.

Gogi has 3 daughters and a son, as well as 7 grandchildren. Her son Robert is a skilled TLB operator and works for a construction company. One of her daughters, Fikile, is currently working alongside her in the scullery, learning the ropes. Her daughter Winnie was very involved in our Thousand Herbs and Garden Project until her untimely demise in 2018.

Tragically her husband passed away in 2008 and Gogi has never remarried.

Gogi has had a few close scrapes with animals during her long history of working in the bush – mostly with elephants. She’s had to run from a charging pachyderm on more than one occasion and always asks that we steer clear of these lumbering giants on the staff game drives. Her favourite animals are lions and leopards, because they mock charge you like elephants do!

Gogi is an inspiration to us all and a fine example to all our employees at Simbambili Lodge. She’s achieved so much despite her limited English skills and lack of education. We salute you Gogi!

Get to meet this enigmatic lady and her co-workers when you book your stay at Thornybush’s Simbambili Game Lodge.