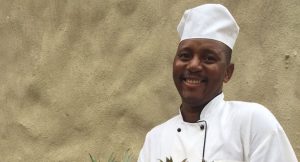 Visitors to Simbambili Game Lodge have head chef Matthews and his staff to thank for the abundance of tasty food that they enjoy while on safari. Matthews hails from Maputo in Mozambique, and spent his youth raising cattle and running chores with his siblings in between his school work.

From Mozambique to Manyeleti

In 1985 his family relocated to Hoedspruit in South Africa, where Matthews attended Manyeleti Primary School.

In 1997 he started work as a stable hand in Hoedspruit. His new boss, Mike Cowden, who was then the manager of Thornybush’s Simbambili Lodge, was so impressed with him that he offered him a job at the lodge instead. So, Matthews came to work within the reserve carrying out general maintenance and gardening work.

After just two months at the Lodge, Matthews was recognised as being so much more than just a casual labourer, and was asked if he would like to undergo training as a waiter. This was another job which he undertook with great enthusiasm, and in 2002 he applied to become a student chef at Simbambili lodge.

Without further ado, Matthews was whisked off to Thornybush Lodge for training. Following 3 months under the watchful eye of Lodrick, he was unleashed on the kitchens at Simbambili as assistant chef.

During this three-year stint, he learned as much as he could from his gifted colleagues about cooking great food.

Moving up the ranks

Matthews was given the opportunity to take over the reins as head chef when the current chef,  ‘decided she was tired of cooking’! In his role as head chef, Matthews now finds himself in the position of mentor to up-and-coming young chefs, and encourages them to watch and learn just as he did on his road to success.

After 19 years at Simbambili, Matthews has become an integral part of the happy family at the lodge and his knack of conjuring up five-star meals in the middle of the wilderness is admired by guests and colleagues alike.

Looking for some cooking inspiration with African flair? Keep an eye out on the blog for recipes from our chefs!