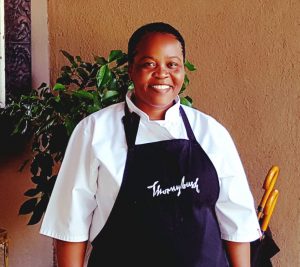 When you stay at the intimate River Lodge, you’ll get to enjoy hearty meals crafted from the freshest ingredients. You can also indulge in a range of sweet pastries, cakes and desserts courtesy of Nomsa Mathebula, one of Thornybush’s experienced chefs.

Nomsa is bushveld born and bred, having been raised in the village of Hluvukani, not far from Thornybush Private Game Reserve. She has been indirectly associated with the South African safari industry since she started her first job as a nanny.

Nomsa started out working for a couple in Hoedspruit, caring for their two little girls and got her first glimpses of the safari industry from her time with the family. Both parents were involved in the game lodge industry and when they travelled on business, Nomsa was often invited along to keep an eye on her charges.

It was during these first journeys into the wild that Nomsa experienced her first taste of safari life and got to meet some of the people who would be instrumental in her career. She also learnt to cook for the children on occasions when her employers were working late into the night.

The little ones loved her meals, and soon mom and dad wanted some of the action too. They encouraged Nomsa to learn more, giving her recipe books and free reign to adjust the dishes to suit their tastes.

Before long, she expanded her skills to deserts, making cakes and treats for the family and this is when she discovered her passion for baking.

The girls grew up and since they no longer needed Nomsa’s attentions 24/7, her employers arranged for her to start work as a housekeeper at Waterside Lodge. Content to be working in the bush, Nomsa happily went about her tasks, all the while keeping tabs on what was going on in the kitchen.

Three years later, she was transferred to River Lodge, a more intimate establishment where her passion for cooking caught the attention of Chefs Addy and Thulani.

Not wanting to waste her talents, her two mentors spent time teaching her the tricks of the trade. Thulani’s patient instruction in the art of baking paid off, and before long, Nomsa was appointed as the new pastry chef for River Lodge.

Nomsa’s willingness to help and accommodating nature means she’s also involved in preparing the day to day meals at River Lodge. However, it’s still the aroma of freshly baked bread and confectionary that keeps the sweet smile on Nomsa’s face.

Nomsa has 2 children of her own who live with her grandmother while Nomsa works and she loves spoiling them with the tricks of her trade during her time off.

Get in on the Action

Don’t you think it’s time you booked your safari at a game lodge that also means business when it comes to satisfying your taste buds?