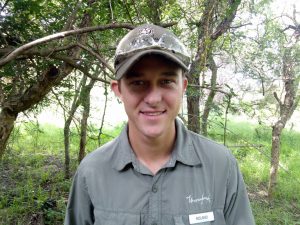 Roland Mann was born and bred for a life in the bush. As the son of a game ranger, he has been exposed to this lifestyle from his earliest days, and it shows in his work.

Roland’s instinctive knowledge of animal behaviour makes him one of Thornybush’s most popular rangers and he currently spreads his time between both Monwana and Serondella Lodges.

Roland is dedicated to passing his love of the bush and all its creatures on to others, and it shows.

According to TripAdvisor, guests describe this young expert as ”experienced beyond his years, confident, competent and fascinating” and have been heard calling him ‘the leopard hunter” on occasion. This is in no small part due to his affinity for leopards and the way in which he seems to conjure them out of the air on game drives.

Roland’s skills are no accident. He was born in Malawi and spent his early days in Zambia, where most of his free time was spent out in nature, exploring his surroundings. Over time, he became intimately familiar with the ways of animals, birds and snakes, learning to track them with expert skill at a young age.

As soon as he was finished with school, he was off to Bush School and passed his ranger qualifications with flying colours.

His first job was as a volunteer at a game reserve near the Botswana border, where he learnt the tricks of the trade while shadowing some of the best rangers in the business.

Armed with a wealth of knowledge passed down from his father and from his time on the ground, Roland eventually made his way to Thornybush. He currently has over 1000 hours logged out in the field and has experienced more than 600 wild game interactions on foot.

In his spare time, he tracks animals for fun and sometimes goes fishing in a nearby dam or even the sea during his annual vacation.

Out of all these memorable instances, one stands out as the most bizarre in Roland’s mind. He was escorting his guests on a game drive when they came across a spotted hyena in the wild.

Something about this animal’s behaviour intrigued Roland. Instead of behaving with the curiosity so typical of its species, this hyena seemed unfazed by these two-legged intruders and walked off, passing close by the game vehicle.

Roland followed and as he progressed, the hyena kept looking back and stopping, as if waiting for him to catch up. This stop-start progression continued until they reached the spot where a leopard kill was visible in the fork of a tree. At the foot of the tree, lay the sleeping leopard.

The hyena vanished into the bush, and Roland was left wondering why a hyena would lead him to such an amazing sighting. He’s never got to the bottom of this bizarre behaviour and it mystifies him to this day.

Best Part of the Job

It’s clear that this passionate young man is in love with his job. He relishes the opportunity to share his wild world with guests from across the globe and loves the fact that he still learns new things all the time. Every day is an exciting adventure waiting to be unwrapped as Roland embarks on his mission to “go find the animals.”

Meet Roland and our other dedicated staff members when you book your South African safari with Thornybush Lodges. We can’t wait to introduce you to our wonderful world of wildlife.