The Youngest Tracker and Ranger Duo of the Northern Sabi Sands

The Youngest Tracker and Ranger Duo of the Northern Sabi Sands

Meet Sabre Meeser and Tiyiselani Sithole, the youngest Field Guide and Tracker respectively, of the Northern Sabi Sands. This dynamic safari guide team is situated at Thornybush’s Simbambili Lodge where they have been taking care of guests on their game vehicle, sighting and tracking world-class wildlife, for the last two years. We wanted to find out more about their relationship, why it works so well and how they have become such good friends. So, sit back, grab that safari-approved GnT and let’s tell you their story.

A team from the start 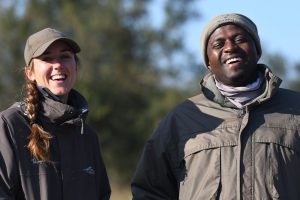 Their relationship all started by accident… One day Tiyiselani, aka Mr T as he is affectionately known by us all, who had only been working in maintenance for a few months, got a call saying that there was one tracker short on one of the game vehicles. As he was a “stand-by” tracker with years of tracking experience already, he jumped at the opportunity. This particular afternoon drive was with Sabre and turned out to be anything but ordinary: they shared an adventurous afternoon spotting the big five and faced a challenging vehicle breakdown. But with Mr T’s tenacious attitude he saw them out of their pickle and ended the drive with big smiles! Needless to say this was the start of a bond that’s now become a Northern Sabi Sands legacy.

Growing up in the bush

Both Sabre and Mr T have a solid family history of guides and trackers. Sabre’s parents are both guides and Mr T’s father and grandfathers were trackers, so it’s not surprising that these two formed this organic bond and dedication for the bush that history had already written for them.

Sabre and Mr T are also both from the Manyeleti (a neighbouring reserve and area outside of the Sabi Sands) and having grown up in such close proximity to what eventually shaped their careers, being a team with a similar background has made them feel like family.

What makes them a team

Creating a bond always stems from similar personalities. In this case, it is the driving force behind their success – they’re able to connect personally and professionally which makes their communication easier. Also, allowing each of them to be patient with one another. But their magic sauce? Always have fun! Being young and passionate about the bush allows them to create an energy of excitement for their guests (and if you’ve ever been on a game drive with these two, then you’ll know!) even in the times of the unspoken you’ll start to pick up on their natural way of communicating – it’s like they know what the other is thinking!

Sitting down with the two of them, there is one strength of their bond that is evident. They’re there to learn from each other. Being open and honest about each other’s strengths and weaknesses is what possibly makes this duo so great. Their respect for each other goes beyond friendship.

As Mr T is Tsonga, Sabre tells us that he is often teaching her about his culture and as she is getting married soon, their most common conversation is around the cultural differences around marriage. And if you’re a guest on their vehicle, you’ll find these two teaching their way through the flora and fauna, Mr T from a medical perspective of how these plants are used in his culture and from Sabre’s more scientific angle. Being able to share such passion and allow each other to share their knowledge is just another sign of their special bond.

A masculine and feminine balance 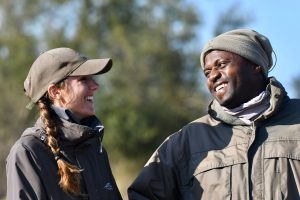 It’s not often that you’ll find a female and male team, and very seldomly will you come across a female tracker. But as Sabre puts it, “the muscle is needed”. Game drives often involve tyre changes and removing obstructions in the road, so it helps to have a man at the helm to use his physical strength. They’re not concerned with gender dynamics, as they say, that it’s the teamwork that makes their partnership work. As a woman, Sabre believes that she is more sensitive towards guests’ needs which drives the compassion that is often needed in challenging situations, and having her “muscle” as the right-hand man makes a great combination.

From Mr T’s perspective, he said that it was quite a challenge taking direction from a woman in the beginning, but as they started to learn more about each other and grow a trusting relationship he realised that female guides are easier to work and communicate with, and that Sabre’s a great guide to whom he enjoys being a right-hand man. 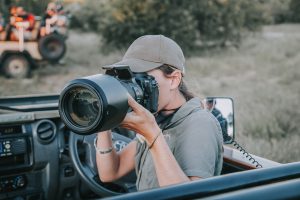 We asked Mr T if there was anything in particular that Sabre has taught him during their time together and he answered with a lot of enthusiasm, “photography!”.

During their drives Sabre’s love for photography started to rub off on Mr T, who often borrowed her camera to snap a shot of a sighting. He loved what photography added to his job and how he was able to capture moments that he may never be able to experience again. It brought a whole new perspective and creative element to tracking and spotting wildlife as he was able to start pursuing wildlife for his guests that were also passionate about their photography.

As his love for photography grew, Sabre continued to nurture this with lengthy conversations about camera settings and shooting angles; and Mr T eventually invested in a Nikon camera like Sabre’s. She’s also encouraged him to set up his own Instagram account to show future and past guests what the wildlife is up to and hopefully grow his hobby into one day becoming a wildlife photographer.

“This picture is unique, this is my best photo!” – Mr T

What is their most memorable moment as a team?

Mr T is a qualified and experienced tracker, being out on foot on a walking safari or venturing into the bush to track wildlife for guests is always a memorable experience for them both. Their best tracking experience on foot was tracking leopards which lead them into a pair of mating leopards. They both rate this as one of the most exhilarating and special moments together.

It’s not a job that makes you money fast, therefore you must do it for the love of your environment and wildlife. There is a lot of learning which comes with experience and studying so being fully invested makes a big difference.

You will never know enough, there is always something new to learn – from your partner, from your environment and from your guests. Your tracker is your partner, and vice versa, learn to listen to them and respect their ideas. You each see things differently and there lies the magic of a partnership.

If you’re passionate about a career in the bush, start by being in the bush. A lot of the lessons you learn are not in books. Listen to your instincts, open your eyes to the bush around you, watch the animals, read their signs and learn, above all else, to respect that you are in their world.

If you ever find yourself at Simbambili, we hope that you get to experience a game drive with this dynamic duo. Thank you Sabre and Mr T for sharing your story!