20th February 2021 marks the 10th annual World Pangolin Day, which marks a milestone in spreading conservation awareness for this very special, highly endangered species. Let us share our top five reasons why we have so much pride in our pangos, and why we as a (wildlife-loving) human race should continue to forge a path to protect them.

The 8 pangos of the world 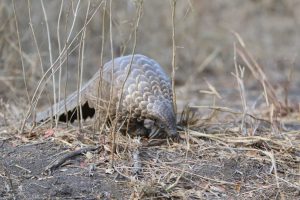 Even though the species is distributed around the earth, it hasn’t stopped them from fighting for survival against being the most trafficked mammal on earth, teetering on extinction.

Their trade based on a lie

Just like a rhino’s horn, pangolins’ scales are their most sought after attribute. Even though their scales are in high demand for medicinal purposes in Asia, there is no scientific evidence of its perceived ailment cures. However, this doesn’t stop their illegal trade into meat markets, as their flesh is also known to be offered as a delicacy in high-end Vietnamese restaurants.

To help spread awareness of this tragic global trade, here are our top five reasons to fall in love with, and protect this highly endangered (and oh so special) species. 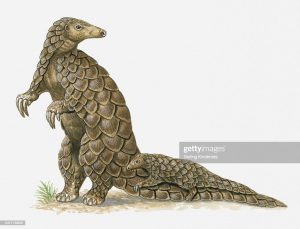 2 – They’re the only mammal covered in scales

Pangolins have a built-in coat of impenetrable amour which is made up of rows upon rows of robust, overlapping scales. These scales, just like rhino horn and our fingernails are made up of keratin which is, unfortunately, the very reason they’re poached.

3 – They roll up for protection 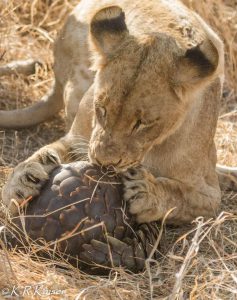 Pangolins instantly roll up for protection when threatened, making it nearly impossible for predators (humans not included) to harm them. We can now see why their name, derived from the Malay word, pengguling, means ‘one who rolls up’.

Even though this may be one of the sweetest things about a pango, it’s also the reason why they’re so vulnerable to poachers.

Pangolins may seem small but their ravenous appetites definitely outweigh their looks.  They’re picky eaters –  each pango has an individual taste and if a termite mound doesn’t suit their palette they’ll move on! When they do find their pot of gold, their unusually long, sticky, coiled tongue (which is longer than their head and body combined) is able to extract termites and ants with great efficiency.

Due to this fussy eating, pangos help to create a balance in the ecosystem by aerating the soil (by foraging) and eradicating insects in large numbers  – they’ve just got to find the right ant-buffet to munch on! 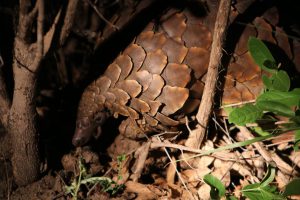 As solitary and mostly nocturnal creatures they’re used to being on their own. Whether it’s sleeping in underground burrows or out foraging for food, you’ll never see them in a group, unless they have a pup, but even then it’s just mom and baby. Pangolins possess an incredibly acute sense of smell, to find their favourite buffet, but no vocal cords. Without vocal chords, pangolins are unable to communicate with each other, so if one pango hits the jackpot with a delectable termite mound, it won’t be able to alert any other pangos. Sadly, this also means that pangolins are incapable of signalling any sort of distress call when they’re under threat which makes them even more vulnerable to poachers.

Share the voice of the pangolin today with #worldpangolinday and let’s spread the pango pride!

For more information on how you can get involved with conservation efforts, visit – https://www.pangolins.org/